by Dr. Christopher Chang, last modified on 8/17/17.
Read and comment below! 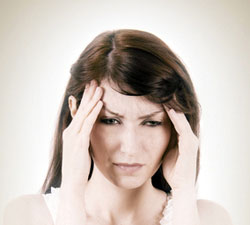 People experience dizziness in many different ways. But one of the most disconcerting dizzy conditions is called Meniere's Disease given how random the dizzy attacks are, how long the dizziness lasts for, and how frequently such attacks may happen.

The "classic" description for Meniere's Disease is someone who experiences spinning dizzy attacks (vertigo) that lasts continuously for hours to days that occurs soon after one ear suddenly starts ringing, feeling full, and experiences sudden hearing loss. Once the dizziness passes, the affected ear goes back to normal.

It is not unusual that the affected ear may experience a fluctuating hearing loss for months or even years before a dizzy attack finally occurs.

Nobody exactly knows what causes Meniere's Disease, but it is generally agreed that the underlying etiology is a fluid buildup (endolymp) within the inner ear (the part of the ear that can NOT be seen visually).

With fluid buildup within the inner ear, fluid pressure builds up stretching the delicate membranes that separates the compartments of the inner ear. As the membranes of the inner ear stretch, hearing diminishes and tinnitus worsens. When the membranes are severely stretched by increasing fluid pressure, the membranes ultimately rupture like a water balloon resulting in fluid mixing, one compartment rich in sodium and the other rich in potassium. The mixture of these fluids is thought to bring on the vertigo. After the membranes rupture, they eventually heal over hours to days which resolves the vertigo. Over time, such repetitive ruptures causing vertigo will lead slowly lead to progressive and permanent hearing loss.

Diagnosis is usually by patient history, but studies are often done to confirm as well as evaluate for other conditions that my mimic Meniere's Disease.

Testing that is typically performed to evaluate and help diagnose Meniere's Disease include:

• Audiogram to document and follow any hearing loss patterns
• Dix-Hallpike maneuver to check for BPPV
• MRI scan of the head: Evaluate for any brain tumors like acoustic neuroma
• ENG (electronystagmography): evaluate the balance nerve function
• ECoG (electrocochleography): way to measure fluid pressure within the inner ear
• Autoimmune bloodwork
• Lyme and syphilis testing in patients with an appropriate history of exposure
• Allergy testing (in a significant percentage of people with Meniere's Disease, there appears to be an allergic influence)

Other disease conditions that may be confused with Meniere's include:

The treatment of Meniere's Disease occurs in stages from the least invasive to the most invasive. The patient must keep in mind that Meniere's can not be "cured," but managed. The acute symptoms of Meniere's can be treated short-term with meclizine, benzodiazepines,and/ or steroids, but these drugs should be avoided for long-term management.

Avoid salt (sodium), caffiene, and alcohol which seem to trigger vertigo attacks. With salt, it is not just adding salt to foods, but minimizing the total sodium intake to less than 1200mg per day which is not easy to do.

No alcohol is pretty self-explanatory.

Usually, patients start to feel improvement in about 4 weeks. Please note that this is a LIFE-LONG dietary restriction and patients will usually suffer a relapse of Meniere's Disease if they start cheating on the salt and caffiene particularly. Such relapses are not uncommon around the holidays, especially Thanksgiving time period.

If diet restrictions alone do not resolve the vertigo attacks, a diuretic (water) pill is often prescribed to "urinate out" the excess fluid. The typical drug prescribed is maxzide, though any diuretic pill will do.

Betahistine can also be tried (not FDA approved and typically obtained at a compound pharmacy).

Phenergan can be prescribed to help with the nausea as well as symptoms of vertigo as well.

In severe cases, valium can also be provided to help abort an attack if a patient feels an attack coming on (NOT to be taken on a routine basis), but should be avoided if at all possible due to its addictive potential.

Ultimately, prednisone can be prescribed as well as steroid injections directly into the affected ear to help abort an attack [reference].

Should dietary restrictions and diuretic medications fail to resolve recurrent and persistent vertigo attacks, more invasive procedures can be performed. Typically these options require a referral to a neuro-otology specialist.

The first procedure I typically suggest is endolymphatic shunt (ELS) surgery which tries to "physically" prevent fluid buildup by drilling a hole into the inner ear (the endolymphatic sac) and placing a shunt. Theoretically, by placing a shunt, fluid buildup can not occur because it would automatically drain out of the inner ear via the shunt. And it does seem to work about 80% of the time in minimizing symptoms of Meniere's Disease.

Should ELS fail, more destructive procedures can be considered. One option is a drug called gentamycin which can be injected into the inner ear to try and "kill" the balance nerve. However, this treatment can also permanently destroy any residual hearing that is left.

Finally, the balance nerve itself can be surgically cut when all else fails and is considered a last resort given risk of permanent facial paralysis and hearing loss.