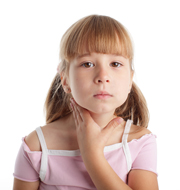 Neck masses are something that affects people of all ages. Understandably, such masses are of great concern for patients, but especially for parents with a child who has a palpable neck mass. This webpage is to provide information on the evaluation and management of neck masses in kids. Information on neck masses in adults can be found here.

As a general rule of thumb, physicians do not consider a neck mass "significant" until it reaches at least 1.5cm in size. Neck masses <1.5cm are generally observed unless there are other findings that increase level of concern.

Furthermore, 22% of healthy children (4-10 years) were found to have single or multiple neck masses up to 2cm in size.

Given neck masses are so common in kids, when is a workup performed?

Typically, a workup is pursued if there is a possible cancer concern as well as to obtain a diagnosis if a neck mass persists beyond 2 months. Other features that increase level of concern include:

• Size greater than 1.5cm
• Neck mass is located right above the collarbone (supraclavicular region)
• History of cancer
• The mass is very firm to the touch and does not move around when pushed.
• Does not fluctuate in size. Steadily increasing in size.
• Concurrent systemic abnormalities (persistent cough/fever, weight loss, large spleen, etc)

Once a decision for workup has been made, the following initial studies may be obtained:

• Chest x-ray (if cough present or contact with tuberculosis)
• Ultrasound to evaluate physical characteristics of the mass
• Blood tests for EBV, CMV, toxoplasma, and bartonella. Brucella is obtained if child drinks raw milk or has been exposed to sick livestock.

Regarding the blood tests when routinely obtained for all pediatric neck masses, positive findings occur in only <10%, so the yield is not very high.

Finally, based on results of testing, a tissue biopsy may be pursued. Typically, that either means a needle biopsy whereby a small core of tissue is obtained or the entire mass completely surgically excised.

A needle biopsy is considered less invasive given only a needle is inserted through the skin and into the mass. It does have high specificity between 92-100% and sensitivity of 67-100%. Even better is a surgical biopsy given the entire mass is removed and analyzed, but is invasive with potential for complications and pursued when all other tests have been non-diagnostic.

Watch Video on "How Long Do Biopsy Results Take"

Depending on the location of the neck mass, the possible diagnosis does vary.

To reiterate, the vast majority of infectious causes of neck masses is due lymphadenitis, otherwise known as inflamed lymph nodes due to infection somewhere else in the head and neck region. Lymphadenitis can occur ANYWHERE in the neck. If the lymphadenitis gets bad enough, a neck mass may turn into a neck abscess. However, other underlying infectious processes may be going on contributing to a typically painful neck mass with overlying skin that is red and tender in certain discrete areas of the neck. Each of these processes may also turn into an abscess if it gets bad enough. Cancer can also appear anywhere in the neck region as well. However, when a neck mass appears in the following regions, the issue is typically due to: 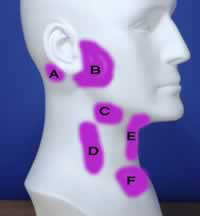 F: Highest risk of cancer in this location

If ultimately surgery is pursued, below are some safe videos you can watch with your child to prepare them for day of surgery!

When does an enlarged cervical lymph node in a child need excision? A systematic review. Int J Pediatr Otorhinolaryngol. 2014 Mar;78(3):393-401.