by Dr. Christopher Chang, last modified on 9/14/16.
Read and comment below! 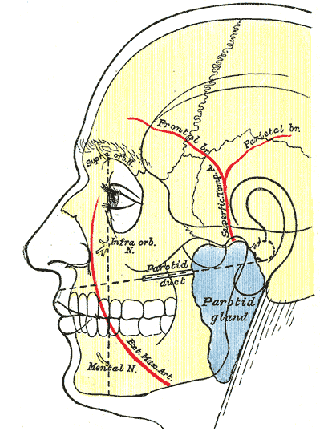 Parotidectomy is a major surgical procedure to remove the parotid gland (shaded blue in the image) which is one of 2 major salivary glands found in the human body. The most common reason to remove this gland is due to an abnormal mass contained within. The mass itself can be found anywhere within the parotid gland. It rarely causes any pain or discomfort. In fact, the only symptom a patient would complain of is that they feel a lump there.

Most masses that develop in the parotid gland are due to benign tumors such as a pleomorphic adenoma or warthin's tumor. These are generally painless and move around easily when manipulated. Even if benign, these tumors should be removed as they will NOT go away on their own and will continue to increase in size over time causing facial disfigurement. Usually over decades, these benign tumors may also become cancerous (carcinoma ex pleomorphic adenoma).

Unfortunately, some masses can be cancerous and include mucoepidermoid carcinoma, acinic cell carcinoma, as well as metastases from skin cancer (squamous cell carcinoma being the most common). If there is pain, numbness over the face, or facial paralysis, the likelihood of the parotid mass being cancerous increases signficantly.

Watch Video on "How Long Do Biopsy Results Take"

Typically, the workup of a parotid mass includes a CT scan with contrast of the face as well as fine needle aspiration (FNA) biopsy of the mass itself. MRI scan is rarely obtained. Obtaining an FNA is helpful in determining the extent of surgical excision required. If no malignancy is detected, the goal of surgery is to excise the mass itself. If malignancy is found, a much more extensive surgical procedure is required involving the complete removal of the entire parotid gland and surrounding lymph nodes (neck dissection).

A common concern patients express about this surgery is whether this will affect their salivary production. The blunt answer is NO. 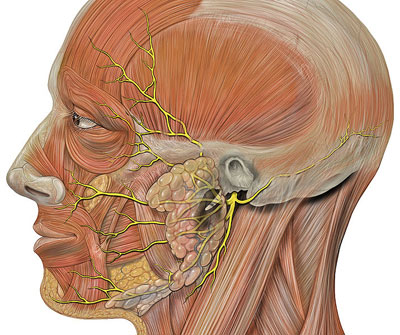 Why does it take so long??? It's because the surgery requires both highly technical micro-dissection as well as facial nerve monitoring and as such, is not just simply cutting the skin and removing the mass without regard to surrounding structures. The reason is because the nerve that makes the face moves goes RIGHT THROUGH THE MIDDLE OF THE PAROTID GLAND!!!

In the image above, the facial nerve is shown in yellow coming out from behind the ear, and extending like fingers toward the forehead, eye, nose, lips, chin, and neck regions (Image by Patrick Lynch taken from Wikipedia). As you can see, all branches of the facial nerve extend thru the parotid gland which is depicted by this mass of tan-colored "frog eggs" in the illustration.

As such, if the surgeon does not identify the facial nerve prior to removing the parotid gland, the patient may be left with a permanent facial paralysis. What does this exactly mean? It means that the person will potentially be unable to close the eye, smile, close the lips, kiss, etc. In essence, it is like having a severe Bell's Palsy that will never get better. 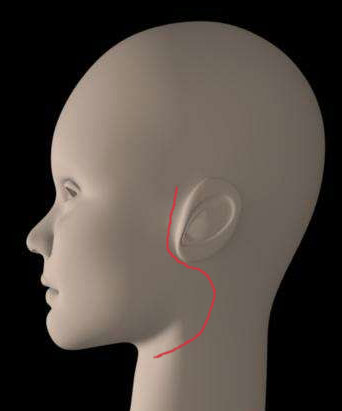 In order to perform this surgery and safely identify and protect the facial nerve, a LONG facial incision is potentially required... up to 6 inches long as shown in red in the illustration below. Depending on the parotid mass location, however, the incision required may be shorter. For example, if the mass is located under the ear, the incision does have have to extend much past the tragus of the ear. If the mass is located in front top part of the ear, the incision does not have to extend as far in the neck.

Regardless, the scar is usually not very noticable... in fact, this incision is very similar to the incision used to perform facelifts for cosmetic reasons.

Steps to the Surgery

Watch Video on Parotidectomy. Beware that the video is quite graphic.

Obviously, facial paralysis is the major risk of surgery. Keep in mind that even if the facial nerve is identified and protected, TEMPORARY facial paralysis may occur and is not unusual occuring up to 20% of the time.

Rarely, 1-2 weeks after surgery, a salivary fistula may develop between the residual gland and the skin resulting in "spit" coming out the skin, usually somewhere along the incision or at the drain site. This complication usually occurs due to infection, very thin skin flap, or "bad luck".

Although not considered a complication, the patient should be forewarned that the ear very often is numb as the sensory nerves to the ear do get cut during surgery. Fortunately, the ear numbness does very slowly resolve over 9-12+ months, though it may never go quite back to complete normalcy.

Depending on how the surgery goes and how healthy the patient is to begin with, the patient may be able to go home the same day or the next day. The surgical drain is removed usually within 3 days and the sutures 5-7 days after surgery. Pain is not that bad in the vast majority of patients after this surgery with most people requiring narcotics only during the first week.

The patient is able to eat whatever they want but is forbidden from any exercise or heavy lifting the first 1-2 weeks after surgery.

After everything heals up, the incision should be barely noticeable.

HOWEVER, the left facial region will appear somewhat sunken in compared with the normal opposite side, especially behind the jawbone, below the ear. Furthermore, the bigger the parotid mass is to begin with, the more asymmetric the appearance will be after the surgery.

Because by removing a mass, there will be a "hole" left behind. The bigger the mass, the bigger the hole leading to a sunken appearance after parotid surgery.

Contact our office to schedule an appointment if you have a parotid mass.