by Dr. Christopher Chang, last modified on 4/13/21.
Read and comment below!

Vocal cord cysts and polyps are painless "bumps" that develop on the vocal cords causing symptoms of a slowly progressive raspy voice. Initially, the raspiness may only occur in the high pitches characterized by onset delays (voice that starts silent before a sound is produced) or pitch breaks (certain sounds that disappear). However, as they get bigger, the raspiness may extend to throughout the entire vocal pitch range. Listen to some examples of patients with vocal cord cysts and polyps here.

Vocal cord cysts and polyps are not cancerous and are known to be exacerbated by excessive voice use (singing, cheerleading, teachers, yelling, screaming, etc). Less commonly, they can occur due to other abusive vocal behaviors including chronic throat clearing, chronic coughing, and whispering.

However, what causes them to occur in the first place is less clear. Cysts are vocal cord masses located UNDERNEATH the lining of the vocal cord whereas polyps are masses INVOLVING the lining of the vocal cord. To use an analogy, cysts are much like sebaceous cysts that can be found under the facial or neck skin whereas polyps are like blisters of the skin like those that form on the hand when shoveling a lot of dirt or rowing a boat. A similar but different condition called vocal cord nodules is due to a "callous" formation on the vocal cord lining, much like shoveling dirt will eventually lead to callous formation on the hands.

Vocal cord cysts and polyps can develop almost anywhere on the vocal cord. Before going into how they form, let's take a look at the diagram below depicting what NORMAL vocal cords looks like:

In the picture, the thin white blades are the true vocal cords. When they move apart, air can move in between the vocal cords into the lungs allowing a person to breathe. When they come together with talking or singing, they vibrate creating the voice. Watch a video to see how a normal voicebox works.

The take-home point here is that the vocal cords come together to create a voice. As such when the voice is abused (screaming, yelling, or just plain talking too much), the vocal cords aggressively vibrate against each other resulting in irritation ESPECIALLY to any mass present on the vocal cord. Such repetitive vibratory trauma to a cyst or polyp will cause them to swell and get bigger causing the voice to degrade in quality. That's why a patient may note their voice is best in the morning and gets progressively worse the more they talk during the day. With voice rest, the cyst/polyp gets smaller and the vocal quality improves.

There are several theories as to why a cyst or polyp may form on the vocal cord in the first place. My personal favorite theory is as follows. At some point, an acute traumatic event to the vocal cord occurs stemming from a yell, cough, or laryngitis. Depending on what happens next determines whether a polyp or cyst develops. 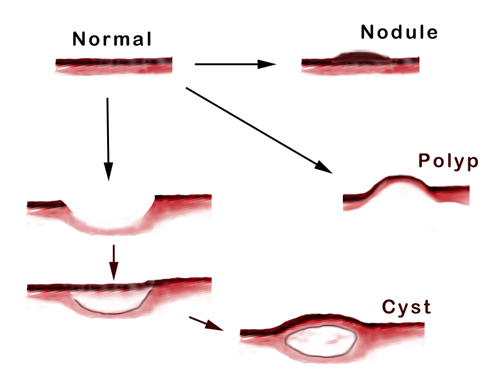 With a cyst, the mucosal vocal cord lining breaks down and during the healing process a cyst develops due to entrapped cells meant for creating lining. A polyp, however, is in essence a blistering of the lining. Vocal cord nodule for comparison's sake is just callous thickening of the vocal cord lining.

In one extreme vocal cord polyp situation, Smoker's Polyps can develop whereby nearly the entire vocal cord is polypoid. This unique situation is due to smoking AND excessive talking. It is the combination of the two which leads to Smoker's polyps.

Traditional standard of care management of vocal cord cysts and polyps start with voice therapy and avoidance of any activities leading to voice abuse (screaming, yelling, etc). The main reason is that with voice therapy alone, it is not uncommon that the cyst or polyp may resolve to point where the vocal quality becomes acceptable and stable. However, more often, only mild improvement occurs with persistence of hoarseness. At this point, surgical excision is recommended. Watch video. 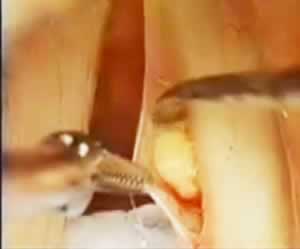 In the case of Smoker's Polyps, quitting smoking is also essential.

With a cyst, the lining is incised and the cyst removed (micro-flap approach shown in the picture). However, with a polyp, it is simply grabbed and removed at its base. Typically no sutures are used to close the incision after excision, mainly because sutures tend to promote scar formation that can adversely affect the voice.

After surgery, STRICT voice rest is mandatory to allow the body to heal the surgical wound site. After about 1-2 weeks, the patient is allowed to start talking in small increments under the guidance of a voice therapist until complete healing has occurred in about 4 weeks. However, the vocal cord lining is "brand new" and careful voice use is recommended for at least 6 months (absolutely no screaming, yelling, or excessive voice use) which risks mucosal tearing and recurrence. Eventually, the patient may use their voice without restriction.

Both for 1 week before and up to 3 months after surgery, reflux medications are recommended for reflux prophylaxis. Why? Because if there's ANY acid that washes over the surgical site from a reflux event, healing will not occur properly (imagine putting some acid drops into the eye after eye surgery).

As a reminder, though vocal cord cysts and polyps can be removed with surgical excision, they can recur if underlying abusive voice behavior that led to the initial formation is not addressed.

If you are suffering from vocal cord cysts or polyps, please contact our office for an appointment.