by Dr. Christopher Chang, last modified on 4/17/21.
Read and comment below!

Before getting into what should be done, first a little anatomy lesson. I promise, it will be just enough anatomy in order to understand treatment.

If you look at the picture of the woman below, the arrow points to the thyroid gland which is shaped like a butterfly and overlies with windpipe (trachea). Triangle arrow-heads point to nerves (yellow) which is found under the thyroid gland and is what makes the vocal cords move. 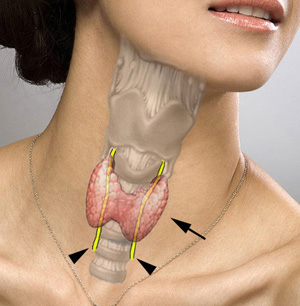 If you turn the thyroid gland around and look at it from behind (see picture above), there are 4 little glands known as parathyroid glands. Although classically, these glands are located at the 4 corners of the thyroid gland, considerable variation exists in where they might be located including nowhere near the thyroid (behind the esophagus or even around the heart). These special glands secrete a hormone called parathyroid hormone (PTH) which regulates the level of calcium and phosphorous in the blood and bones within a very narrow range so that the nervous and muscular systems can function properly.

This function is unlike the thyroid which secretes a completely different hormone which regulates how quickly the body uses energy, makes proteins, and how sensitive the body is to other hormones.

More on why these structures are important below (under risks of parathyroid surgery).

There are generally two situations in which a parathyroid mass is discovered... calcium levels in the blood are found to be abnormally high or a mass is appreciated in the neck. 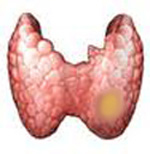 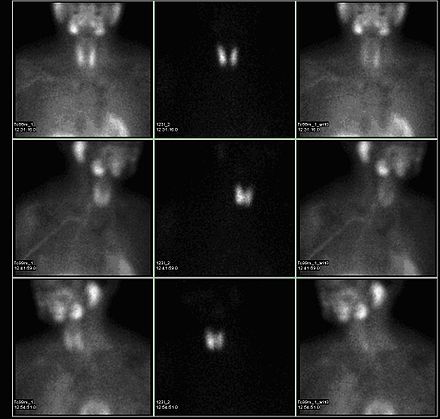 Depending on the clinical situation, a CT neck with contrast may also be obtained as well as an ultrasound guided needle biopsy.

The most common cause for hyperparathyroidism is parathyroid adenoma and surgical removal is curative. Less commonly, cancer may be present due to a parathyroid carcinoma which would require aggressive surgical removal of not just the culprit gland, but the entire thyroid as well as surrounding tissues and lymph nodes.

Removal of the parathyroid gland can potentially be a very simple affair or VERY difficult. 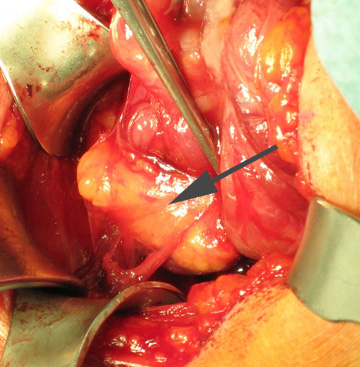 The ultrasound and sestamibi scan both show a single abnormally large or hyperfunctioning gland in a specific location in the thyroid gland (for example, left inferior thyroid pole). An incision is made overlying the thyroid, but shifted slightly to the side of the abnormal parathyroid gland. Dissection is carried down to the abnormal parathyroid gland (depicted by arrow; image by THWZ in Wikipedia) and removed. Intra-operative intact parathyroid hormone (iPTH) levels are than measured and if normal, the skin is closed and patient allowed to go home a few hours later. The enire surgery may last about 30 minutes.

In this situation, the parathyroid gland that is thought to be abnormal is removed... but the intra-operative iPTH levels are still abnormally high. This means that there is another abnormal parathyroid gland present that needs to be removed. But which one? Typically the surgeon will review again the ultrasound and sestamibi scan to try and figure out which gland next to remove. Intraoperative ultrasound and/or radioisotope localization may even be performed to guide which next gland to remove. Ultimately, all four parathyroid glands may end up being evaluated with frozen section pathology analysis to evaluate for presence or absence of adenoma. Once pathology reveals which gland contains adenoma, that gland is than completely removed... and hopefully iPTH levels will normalize. Overall, the surgery may last about 2 hours if all four parathyroid glands end up being evaluated. 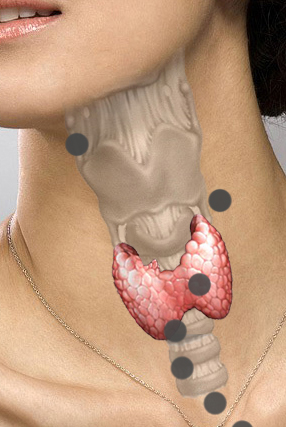 Beyond being unable to find the culprit parathyroid gland as well as the usual bleeding and airway complications that occur with any type of neck surgery, parathyroid surgery has two unique risks associated with it.

Remember the anatomy lesson at the top? There are two key structures that are at risk with parathyroid surgery: the parathyroid gland itself and the nerves that go to the vocal cords.

Lets talk about each one separately with its associated risk.

A patient does not necessarily need all four to survive. It's also possible that the parathyroid glands may be "stunned" by the thyroid surgery and temporarily malfunction resulting in transient calcium level decrease which can be addressed with vitamin D and calcium pill supplementation. 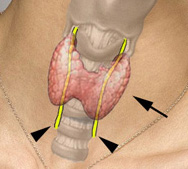 Of particular importance to singers, there is also another nerve near the top of the thyroid gland called the "superior laryngeal nerve" which if cut during surgery, a patient can talk just fine... but when singing, there is loss of upper range and falsetto. Unfortunately, there is no good fix for this if it happens.

What to Expect after Parathyroid Surgery

Assuming no complications and the parathyroid adenoma has been removed completely, recovery and pain resolution is fairly quick (within one week). It is not unusual to be discharged home the same day of surgery. If all four parathyroid glands were biopsied/removed/damaged, hospitalization for 1-3 days or longer may occur to monitor and ensure calcium stability. It is not unusual to have surgical drains placed during the first several days to prevent a hematoma from forming if extensive dissection was performed. Routine wound care to the incision with bacitracin ointment application is required for 1-2 weeks.

Final pathology results take about 1 week at which time a definitive diagnosis of adenoma or cancer can be made if present and subsequent care can be pursued. Click here to see why it takes so long to get a final diagnosis. 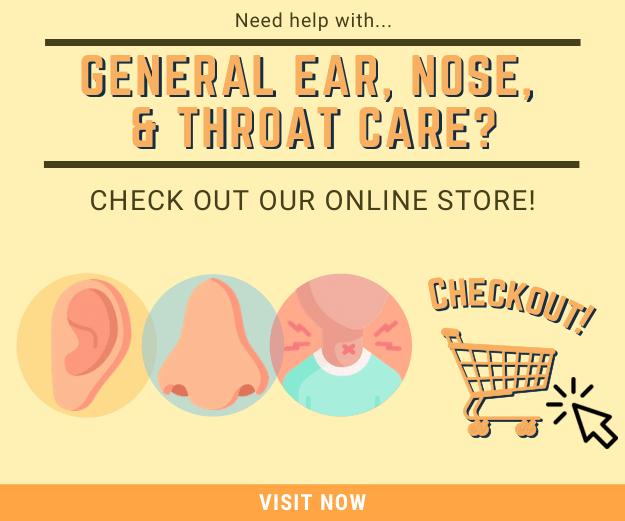