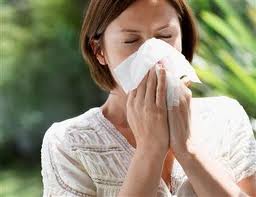 Non-allergic rhinitis is an extremely frustrating sino-nasal disorder that is characterized by all the same symptoms of sinusitis and allergies, but NOT due to sinusitis or allergies. Rather, non-allergic rhinitis is considered to be a nose that is overly-sensitive to air containing particulates whether it be smoke, hairspray, perfume, dust, pollen, etc. Such particulates PHYSICALLY irritates the nasal and sinus lining causing symptoms. This condition is in contrast to allergies where an irritant causes an immunologic reaction causing symptoms or sinusitis which is due to an infection.

To use an analogy... consider the skin. Poison ivy contains a chemical which causes an itchy rash to develop. This reaction is not because of an allergic reaction or infection but rather due to the chemical physically irritating the skin. For patients with non-allergic rhinitis, common air particulates act like poison ivy to the sino-nasal lining.


Patients often have tried numerous courses of antibiotics, allergy medications, and nasal sprays with nominal or only transient relief.

When non-allergic rhinitis is defined as chronic nasal drainage that is not due to infection or allergy, one can come up with 8 different subtypes.

1. Non-allergic rhinopathy (also known as vasomotor rhinitis or idiopathic nonallergic rhinitis). This subtype is what this webpage will mainly focus on.

3. Atrophic rhinits is a chronic condition where there is a progressive atrophy of the nasal mucosal lining leading to main complaints of crusting and dryness. I like to use a nasal emollient like ponaris

to treat this condition.

4. Senile rhinitis is characterized by watery runny nose in the elderly population.

8. Cerebral spinal fluid leak. This rare condition is due to a hole in the bone separating the nose from the brain resulting in brain fluid leaking out the nose. Diagnosis is fairly easy by testing the fluid for beta2-transferrin. Treatment is to surgically plug the hole.

Commonly, though not always, many patients with non-allergic rhinitis report that cigarette smoke, hairspray, and perfume trigger symptoms.

However, in the end, studies are needed in order to determine whether allergies and/or chronic sinusitis are truly present or not before pursuing further treatment that may be unhelpful.

There are other conditions that may produce similar symptoms due to anatomic factors including a deviated septum, large adenoids, turbinate hypertrophy, as well as nasal polyps, but for the sake of the discussion here and to keep things simple, it will be assumed that all anatomic factors are also normal.

In any case, a normal CT scan and normal allergy testing in a setting of sino-nasal problems is highly suggestive of non-allergic rhinitis and treatment geared towards this diagnosis should be pursued.

In order to understand treatment, it is helpful to revisit the poison ivy analogy...

With skin exposure to poison ivy, there's a few things a patient can do to minimize or avoid symptoms altogether:

For patients with non-allergic rhinitis, the treatment is essentially the same:

Video on How to Perform Saline Sinus Flushes

In many individuals with non-allergic rhinitis, the nasal inferior turbinates are quite large. Surgically reducing the large turbinates may provide improvement in symptoms, but not cure. Improvement is typically obtained in about 50% of patients and relief reduction is also around 50%.

Endoscopic vidian nerve and/or posterior nasal nerve resection can be considered the definitive surgical treatment for non-allergic rhinitis [Link #1] [Link #2] [Link #3]. Our office is able to perform an endoscopic technique called ClariFix which can ablate the posterior nasal nerves via freezing. This technique can be performed in the office under local anesthesia only. Read more about Clarifix.

Non-Allergic Rhinitis CAN Turn Into Allergies

This frustrating condition has been portrayed in USA Today as well as Wall Street Journal.

If you suspect you may be suffering from non-allergic rhintis, contact our office for an appointment!